Dr Willem Boshoff grew up on a small farm where his father grew different crops including vegetables and grain crops. Boshoff says from a young age while spending time with his father in the fields he became fascinated by plants – from the different growth stages they go through to the challenges brought along in ensuring a successful harvest.

“I enrolled for a BSc Agric degree at the University of the Free State (UFS) and after been exposed to plant pathology, I decided that this is what I want to do as a career.

“My first employment was with the Agricultural Research Council-Small Grain as a Junior Scientist where I did research on wheat diseases. Here I was exposed to the development of wheat cultivars with genetic resistance to rust fungi. In 2003, I joined Pannar Seed as a wheat breeder and was tasked to develop high yielding wheat cultivars with pest resistance and good bread making quality for the different production areas in SA.”

In 2017 Boshoff became a senior lecturer in plant sciences – in the plant pathology division at the UFS.

According to Boshoff, entry for a BSc Agric degree in Plant Pathology at UFS requires grade 12 Mathematics with a minimum pass rate of 60% (level 6) and two of either Physical Sciences/ Life Sciences/ Agricultural Sciences with a pass rate above 60% (level 6).

One of his career highlights is: as a wheat breeder to experience farmers successfully growing the wheat cultivars that he helped to develop.

Okay, now it’s over to Willem Boshoff, a senior lecturer in Plant Sciences in the Plant Pathology Division of University of the Free State. 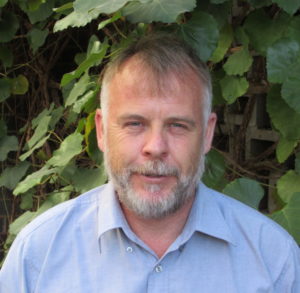 Willem Boshoff, a senior lecturer in Plant Sciences in the Plant Pathology Division at the University of the Free State.

Could you sum up your job for us?

My job is well balanced between standing in front of a class teaching plant pathology, conducting my own research in the greenhouse and field and supervising postgraduate students.

So, what does the day-today of your job entail?

What qualification do you need for this career?

What are the character traits you need to be great at your job?

To maintain a high work ethic, showing determination and persistence, being innovative, and having good people and communication skills, can all be helpful.

What subjects do I need to become a plant pathologist?

At the UFS, entry for a BSc Agric degree in Plant Pathology requires grade 12 Mathematics with a minimum pass rate of 60% (level 6) and two of either Physical Sciences/ Life Sciences/ Agricultural Sciences with a pass rate above 60% (level 6). The minimum required total admission point score is 32. Prospective students not achieving these requirements can be considered for the extended program which requires an extra year of study. 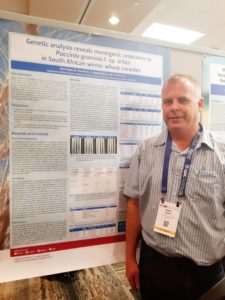 In 2017 Boshoff became a senior lecturer in plant sciences – in the plant pathology division at the University of the Free State.

What do you love about agriculture as a space to work in?

Research is exciting and awarding. As a scientist in agriculture my research is in support of our producers and thereby contributing to food security. Although from our own perspectives we often make only small breakthroughs in our research it may contribute significantly towards growing crops more successfully at farm level, measured in either lower input costs or higher yield with the same input cost, thereby contributing to the profitability and sustainability of our farming community.

Don’t be modest, tell us about your proudest career moments.

When awarded my PhD in Plant Pathology it was a proud moment. It was special to have my parents at the graduation ceremony. As a wheat breeder, to experience farmers successfully growing the wheat cultivars that I helped to develop. More recently the first students that graduated under my supervision.

What do you do when you’re not at work?

I consider myself as a hands-on gardener and do spend time growing flowers and vegetables at home. I do make time to relax with my family.

Any advice for young people who are inspired by your career story here on The Food for Mzansi Agri Career Fair?

Work hard when studying, learn from and respect your supervisor, continuously be on the lookout for opportunities where you can learn and contribute.

Where can I study to become a Plant Pathologist?

The University of the Free State as well as some of the other tertiary institutions does present Plant Pathology.